GUE Project Baseline is gaining momentum and remains organized as a means to leverage the energy of passionate advocates toward the sustainable education, exploration and conservation of the aquatic realm. Meanwhile, GUE’s Woodville Karst Plain Project is a shining example of the amazing possibilities when volunteers and their passions are organized around a common purpose. The nearly twenty year commitment of the WKPP received special recognition by the Florida Government on Tuesday morning, March 10. During the regularly scheduled Florida Cabinet Meeting at the Capital, the WKPP was presented with a resolution in recognition of 20 years of exceptional volunteer service to the State of Florida. Sponsoring the resolution was Florida Chief Financial Officer Alex Sink; Governor Charlie Crist, Attorney General Bill McCollum and Agriculture Commissioner Charles Bronson unanimously passed the motion. 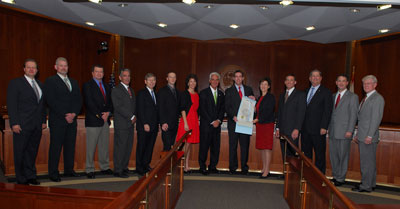 
In addition to the resolution, it was made clear by CFO Sink, Manley Fuller and Secretary Sole that WKPP contributions have been instrumental in furthering the understanding and ultimately the protection of the cave systems beneath the Woodville Karst Plain including Wakulla Springs. Exploration, survey and scientific support in addition to first hand observation, photos, video and testimony have been the basis for policy decisions and multi-million dollar land purchases covering large tracts of land above and adjacent to Florida cave systems. Direct support of various research initiatives including GUE Science Director Todd Kincaid’s tracing efforts have proven extremely valuable towards protecting Wakulla Springs from nitrate pollution. In fact, these efforts have encouraged the City of Tallahassee to invest at least $220 million dollars in order to upgrade water treatment facilities. As a result the City of Tallahassee along with Wakulla County and Leon County signed a ground breaking agreement pledging a coordinated effort to protect ground water supplies including Wakulla Springs.

* Please note that you must have an MP3-capable media player to listen to this recording.