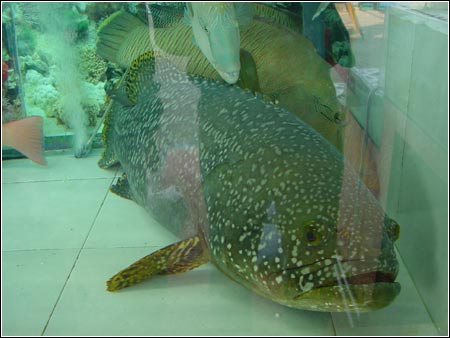 Even though not a great deal is known about them, it is still beyond the scope of this essay to discuss all the fishing activities prevalent in the South China Sea. This is a particularly worrisome fact given that, even though a great deal more is known about the fisheries of the North Atlantic, the Cod fishing industry still managed to collapse. With this in mind, and because Hong Kong highlights the regional situation, it is important to provide some information about Hong Kong.

Hong Kong’s fishing fleet comprises some 4,500 fishing vessels, employing about 190,000 fishermen; in 1998, it produced 180,000 tons of fisheries products valued at U.S. $270 million. Not bad for a population of approximately 6.5 million and a coastal area of about 1000 square kilometers. But here is the snag: 90% of its catch came from outside of Hong Kong, that is, it mostly came from the South China Sea.

Two-thirds of Hong Kong’s fleet comprises local, inshore vessels, with only the remaining third being able to fish offshore waters with a range of approximately 650 kilometers (406 miles)...

Chinese Government has a year-round ban on trawling in its territorial waters down to a depth of 40 meters (132 feet), and other areas have closed seasons for all fishing. Though this may also sound good, hand-lining and gill-netting are largely unrestricted, and inshore waters contain very few fish apart from those that in most areas would be considered not worth the effort of catching. In 1999 and 2000, fishing was banned in all of China’s territorially claimed seas, including the South China Sea, for June and July. This has affected some four million Chinese (including Hong Kong) fishermen, and although the impact of this action is unknown, it indicates clearly the extent to which overfishing is perceived to be a problem in at least the Chinese-controlled South China Sea.

In an attempt to provide for voracious seafood appetites, Hong Kong has developed a mariculture industry occupying twenty-six fish culture zones with a sea area of 209 hectares and some 1,480 operators. Production in 1998 was only about 12,000 tons, which catered to about 5% of local demand for live marine fish. The aquaculture sector, including freshwater production, was 6,200 tons in 1998, valued at US $25 million, which accounts for 3% of the local catch by weight, but 8% of the value. This seems to be a good idea, and the industry is sustained by 30,000 tons of locally so-called “trash fish” caught by the local capture fisheries. These are chopped up and fed to the caged seabreams, groupers and snappers, so nothing is wasted. In reality, however, such “trash fish” are the fingerlings and juveniles of what would be commercially valuable species if they had ever reached maturity. Clearly something needs to change.

It typically occurs over coral reefs and, in some places, such as in Indonesia, it has been a widespread and accepted fishing technique for over fifty years. In fact, blast fishing is not alone in rapidly destroying the coral reefs of Indonesia, but so are poison (cyanide), coral mining, sedimentation (through logging of rainforests) and over-fishing. The same problems of mining (both offshore and inland), dynamite fishing, bottom trawling, coral collection, and domestic, agricultural and industrial pollution have contributed to the deterioration of coral reefs in many other countries. Most recent research on dynamite fishing has been carried out in the Philippines, and it has been calculated that, following blast fishing in the Central Visayas, a recovery time of at least thirty-eight years would be needed to achieve ~50% coral cover. Furthermore, about 71% of Philippine reefs are in poor to fair condition due to excessive siltation caused by deforestation and the widespread use of sodium cyanide and explosives by fishermen. 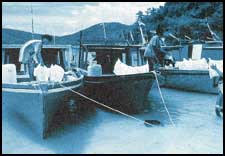 Similarly, the problem of cyanide fishing has been identified as widespread throughout the Asian region. Sodium cyanide (NaCN) has been in use by tropical marine fish collectors in the Philippines since around 1962. Not surprisingly, there is a high mortality of fish captured by sodium cyanide squirted onto the reef, and delayed mortalities occur throughout the chain of middlemen to the aquarium hobbyist. For the unscrupulous suppliers this is good because the aquarium enthusiast keeps returning to buy more fish.

Aquarium fish collection in the Philippines is a multi-million-dollar industry whose growth, however, has recently been interrupted by major slumps. These were attributed to the bad reputation of Philippine aquarium fish in the international market arising from the use of sodium cyanide in collecting them. In Bolinao, a major source of aquarium fish, the efficiency of collection using cyanide and economic incentive systems support its continued use in aquarium fishing. Fishermen are able to befriend law enforcers and/or avoid them so that the only method of effective control is to halt the supply of sodium cyanide. 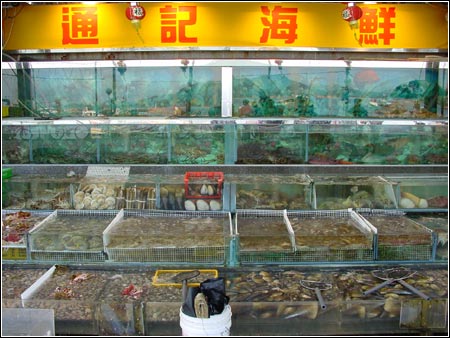 Originally developed for the aquarium trade, cyanide fishing has grown into the live reef fish trade. Indeed it has been reported that any live reef fish in captivity from the Indo-Pacific region was most probably caught with some form of cyanide. Since the 1960s, more than one million kilograms (2.2 million pounds) of cyanide have been sprayed onto coral reefs in the Philippines to stun and capture ornamental aquarium fish bound for the pet shops and aquariums of Europe and North America and, more recently, the live reef fish trade. The increasing demand for live reef fish as seafood in Hong Kong and other major Asian cities has, in recent years, greatly increased the incidence of this practice.

There is always a catch, and with cyanide fishing there is a big one. While cyanide captures fish, it also kills the coral over which 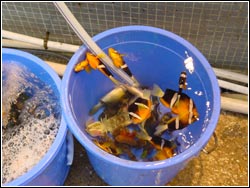 it is sprayed. Experiments have been conducted with reef-building corals that seek to determine the effects of a range of cyanide concentrations likely to be experienced as a result of various cyanide-fishing practices. Following the highest doses, corals died; after medium doses, they lost their zooxanthellae, resulting in bleaching; and, lastly, after the lowest doses, they lost their zooxanthellae, but not in sufficient numbers to cause noticeable discoloration. Furthermore, respiratory rates are inhibited by 10 to 90% following exposure to cyanide, but these can recover to pre-exposure levels within a short period after transfer to clean water.

The annual retail value of the live reef fish trade in Southeast Asia is estimated at U.S. $1.2 billion, U.S. $1 billion of which consists of food fish. 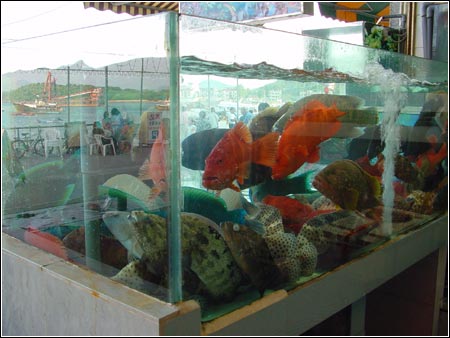 In 1995 it was conservatively estimated that some 20,000 to 25,000 tons of wild live reef fish, caught with the application of tons of cyanide, were imported/exported in Asia annually. This estimate, worryingly, did not include domestic trade, fish that did not recover from the cyanide (that is, left dead in the sea) or did not reach the market alive.

Hong Kong is the center for the live fish trade in Asia; in 1997, annual imports into this Special Administrative Region of China were estimated at 32,000 tons, of which 10 to 20% were re-exported to China. Local consumption here is estimated at 25,600 to 28,000 tons per year, this representing a value of U.S. $500 million. Other large markets include Taiwan and Singapore, importing 7,000 and 1,000 tons, respectively. In Hong Kong, only fish arriving by air have to be declared by importers, and since the majority of fish undoubtedly arrives by sea, the figures are probably gross underestimates. The scale of the problem is, therefore, poorly understood. It is clear, however, that it is huge. It is so profitable, moreover, that the industry is booming. Having destroyed the reefs in the South China Sea, fishermen, supported by business ventures, are moving further into the Western Pacific and are now commissioning fishing vessels capable of carrying 20 tons of live fish.

Cyanide fishing has been growing over the last three decades, and although other East Asian countries are involved, including Singapore, China, Taiwan and Japan, the major fishing fleet involved is Hong Kong’s with an estimated 60% of trade based there. Hong Kong’s live fish trade, with landings of 15,000 tons, is thus sustaining the use of cyanide not only in the South China Sea, but also southwards to Australia and eastwards into the Pacific Islands. Their targets are reef fish, notably, Grouper, especially Coral trout (Plectropomus leopardus) and Napoleon wrasse (Cheilinus undulatus), but, actually, anything that is worthwhile. The demand in Asia, especially Hong Kong and the fast-developing cities of southern China, appears insatiable and it is destroying the reefs of the Western Pacific.

There is no one correct answer or solution to the problems outlined above. For example, regulators may decide that a 30% reduction in catch is necessary to protect fish stocks. Certainly the fishermen paying hard currency, those fishermen who take ‘luxury’ fish for consumption in rich countries, will still get their share despite the reduction. 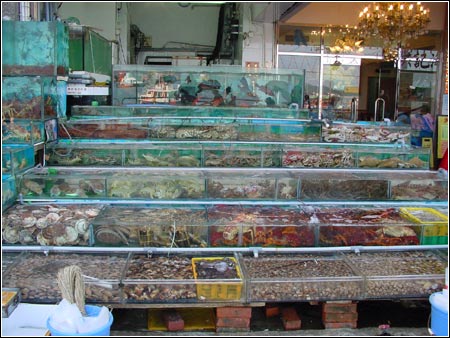 Therefore, a 30% reduction in catch in fact translates to at least a 30% reduction in food for the local population (the size of which may already be determined by local fish catches). So what do we do? Let 30% of the people starve? Obviously, this is not a good solution. Sensible aquaculture may provide a partial solution, but ultimately the problem lies in numbers, and this leads us to controversial issues of birth control or at least re-education, which may be ineffective given some religious beliefs. The problems of destructive fishing are probably easier to solve, and while education and legislation will play a part, ownership and detection are more important.

How can ownership help? Most fishermen know the problems associated with blowing up the reef and even the most unaware and/or uneducated detect declining fish catches. The problem lies in the fact that the sea generally belongs to everybody and, therefore, there is no benefit to Bob looking after his favorite patch of reef if Tom can come along and (initially) catch more fish by bombing or cyanide. This leads to the perspective of: “If he can do it then so will I.” If ownership is assigned, each owner has a vested interest in an area of reef and, therefore, is more likely to look after it and make sure that nobody is destructively fishing within it, thereby destroying livelihoods. This scheme has the added benefit that it is self-policing. Detection can work at the other end of the scale, i.e., at the consumer level. With a cyanide detection system, and simple legislation, a large majority of the cyanide fishing could be stopped. Scientists are currently working on a simple system to detect cyanide. Once done, port authorities (in particular, in the live fish trade centers of Hong Kong, Singapore and Taiwan) will need to test all arriving fish and, without payment or punishment, confiscate the fish taken with cyanide. Without payment there would be no incentive to fish in this manner.

So what can you do? My guess is that most of the readers of DirQuest are living in a western nation, so they may think that there is nothing that they can do. Wrong. In 2001, the biggest market for cyanide-caught aquarium fish was the U.S. Collectors of aquarium fish in the U.S. can start to help by demanding cyanide-free fish. Ultimately, however, finding workable marine conservation measures requires more than idealized goals and benign intentions. A realistic and detailed understanding of ecological conditions, social circumstances and human motivation is needed. Scientists can tell you what is happening and can provide solutions to problems (this is why politicians do not like scientists), but implementation is tied to the political arena. Ironically, then, what marine conservation needs is politicians, and since politicians only care about votes, in the end, the fate of marine conservation is in the hands of the voting public.