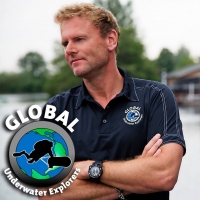 JP Bresser is an experienced technical diver and Instructor with a passion for cave diving. Being an Instructor for almost 30 years JP has been actively teaching all levels of technical Diving for different training organizations and is nowadays active as a Cave and Tech Instructor for GUE, (Global Underwater Explorers). Next to teaching and exploring caves and deep wrecks to write articles for several international diving magazines,.
JP is known for his underwater photography and film work that has featured cave and deep wreck exploration in remote and hard-to reach locations.

JP started diving at the age of 12 and has made more then 5000 dives all over the world. His greatest passion is photography and fieldwork, especially in caves, and his images capture the beauty of this dark realm in a way that few others can emulate. He relates this to the fact that whilst not being the greatest photographer in the world, he feels extremely comfortable at extremes, comfortable enough to take his time to think about and plan the imagery he wants.

in 2010, JP was awarded with the prestigious GUE Instructor of the year award.

JP is also member of several cave exploration teams and has worked with many projects around the world - e.g. MCEP in Mexico, Karst Odyssey and Morpheus in the Balkans and the European Karst Plain Project (EKPP) - to support and manage underwater documentation. As a member of the GUE Atlanta team, JP travelled to the Solomon Islands to document this impressive wreck to depths exceeding 130 meters.

In 2016, JP joined a International Project Baseline initiative on the Bermuda Islands where he worked as video diver in CCR teams, filming scientific work to depths exceeding 100 meters.