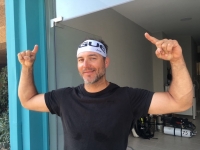 Nikos Vardakas is a dedicated diver, explorer and educator. He started diving in 1999 and has been actively teaching since 2002 for numerous diving organizations. He is currently an active Hypoxic Trimix instructor with SSI and a Fundamentals instructor for GUE.
In 2002, on a quest to improve his skills and know-how, he came across the DIR (Doing It Right) philosophy, developed by GUE, adopting the principles that helped him develop a strong diving practice which continues to this day.
He is also the GUE representative in Greece and, in 2009, was the first Greek to be certified as a GUE instructor. He hopes to pass on his knowledge to the Greek diving community.
In 2018 he founded Scubalife Dive Centre with a vision to offer divers the opportunity to expand their diving frontiers and promote Greece as one of the best diving destinations in the Mediterranean.
Besides training, Nikos is also involved in numerous shipwreck exploration projects in Greece.
In 2021 he became coordinator for the Ghost Diving Greece chapter and is dedicated to helping them on their global mission to remove lost fishing gear from the sea.