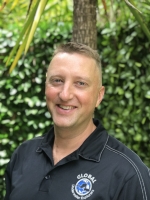 Rhys began his diving career in 2006 whilst living & working in the South Pacific island nation of Vanuatu. After moving back to Australia, he spent many years exploring the numerous deep wrecks off the Australian coastline, the cave systems of Mount Gambier and the Nullarbor Plain, plus various international diving destinations.
Currently based on the tropical island of Espiritu Santo - Vanuatu, Rhys is the General Manager of Pacific Dive Vanuatu, and is the first and only GUE instructor based in the Pacific Islands.
Aswell as being the only technical CCR guide in Vanuatu, he regularly conducts deep CCR exploration dives on the numerous deep reef systems in Vanuatu, aswell as regular deep CCR exploration dives on the wreck of the SS President Coolidge.