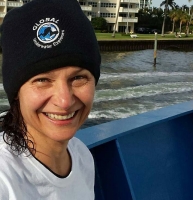 My passion for the underwater world started as a kid in the mid-1970s. We explored the Florida Keys (for many years) with simply a snorkel and a mask. I earned my Open Water certification in Bali Indonesia in 2006 and was first introduced to GUE in 2009. After learning to dive, I spent several years with BAUE exploring the beautiful kelp forests of Monterey, California before moving back home to South Florida to be closer to family and the caves. These days, I dive mostly in Southern Florida on wrecks and reefs, enjoy weekend trips to the North Florida caves and travel to the Mexico caves as often as life permits.