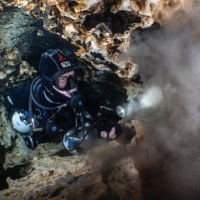 Being a diving educator by profession and a cave diver by passion, Andrea spends most of the year in the island of Sardinia, teaching cave diving and running scientific/documentation projects in the underwater caves of the gulf of Orosei. Winter months are mostly spent in the caves of Mexico, Florida and France, where he runs similar activities but with different groups and pursuing different goals.
As he is involved in multiple exploration, conservation and research projects all over the world (Italy, France, Bosnia & Herzegovina, Slovenia, Portugal, Spain, Mexico and Florida), he had the chance to meet and connect to many people, divers and non-divers alike, that can offer unique skills and capabilities; working on this network of researchers, divers and media experts is a key component of his job. In the last five years most of the activities involved citizen science initiatives, focused on data collection, cave survey, cartography and 3D modelling using photogrammetry techniques.