Anchialine Caves and Their Ecology

Anchialine Caves and Their Ecology
By Thomas Sawicki 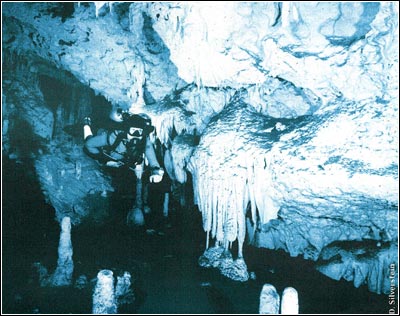 Ecology is the study of the interrelationships between organisms and their environment. As such, it can be a very complicated field of study. In any given ecosystem there may be hundreds, even thousands, of species. Combine this with the inherent unpredictability of a given physical environment, and it is easy to understand why it is so difficult to predict, with any certainty, how changes—be they the loss of a species, a change in the make-up of a species or changes in the physical environment—will affect a given ecosystem.

Caves have been popular in ecosystem studies because they are relatively simple. Compared to many ecosystems, caves have fewer species and smaller population sizes. In terms of physical characteristics, for instance temperature and humidity, caves are relatively stable and predictable environments, with well-defined boundaries. The classic cave food web structure is based upon allochthonous detritus (organic material entering the cave system from the surface), which acts as the food source. This means that most caves are ultimately dependent upon solar energy (photosynthesis) as the source of energy for the food web. Bacteria and fungi break down the detritus, insects and crustaceans feed on the detritus and bacteria, and other organisms such as crayfish, salamanders and fish act as top predators. However, as with most ecosystems, studies in caves have shown that the cave environment can be much more complicated than this prototypical scenario. 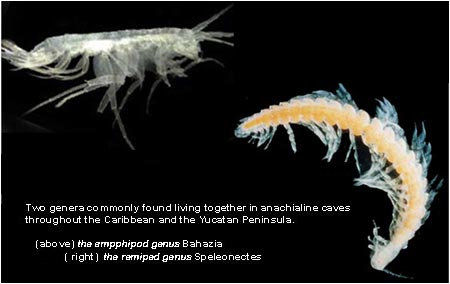 Recent explorations and studies have resulted in the discovery of cave ecosystems in which the dependence on solar energy is ameliorated by chemosynthesis. Chemosynthesis is the production of organic compounds using chemical energy derived from the oxidation of simple inorganic compounds. Chemosynthetic bacteria are the organisms that convert inorganic chemicals into biological energy. If the source of the inorganic chemicals used by chemosynthetic bacteria is geological, for instance hydrothermal vents, then the ecosystem is not directly, or even indirectly, dependent on solar energy; however, if the source of the inorganic chemicals is ultimately biological in nature, for instance decomposed organic matter, then the system is still ultimately tied to solar input. Even if the chemicals that chemosynthetic bacteria use to produce energy are biological in origin, the resultant energy input by chemosynthetic bacteria into a cave ecosystem may allow for greater species diversity, as well as greater population sizes. This is because the active and constant biological production by chemosynthetic bacteria may result in an increased and stable energy supply relative to the chance entrance of detrital matter. The input of detrital matter may be very seasonal in nature, increasing during wet seasons when rain may wash in more organic matter and decreasing during dry seasons. Furthermore, decomposing matter is restrictive as an energy generator for an ecosystem. It simply may not provide enough energy to support large numbers of species or large population sizes.

To date, there is only one cave system on earth that has been confirmed to be energetically completely isolated from solar input, Movile Cave in Southern Romania (Sarbu and Kane 1995). Mats of bacteria, floating on the surface of an underground lake in this cave, convert hydrogen sulfide (H2S), into organic compounds. These bacteria act as the base of the food chain for an abundant fauna, both aquatic and terrestrial. The hydrogen sulfide in the cave comes from deep thermal pockets below the cave, and is not biological in origin (Sarbu and Kane 1995). The number and diversity of the species inhabiting this cave is as remarkable as the cave itself (Sarbu et al. 1994).

The findings in Movile Cave in the late 1980s prompted scientists to investigate the role of chemoautotrophism in other cave ecosystems. One of these systems, anchialine caves, are commonly dived by divers all over the world; for instance, many of the caves on the Yucatan Peninsula in Mexico are anchialine. Anchialine caves are commonly found in karstic regions in the tropics, and are defined by having a fresh to slightly brackish water lens overlying seawater (Iliffe 1992). Thus, a common attribute to these caves is the halocline, the vertical transition from fresh to salt water. Researchers have suggested that chemoautotrophic bacteria may exist at the halocline in at least some anchialine caves, and act as the energy source for a unique community of organisms (Pohlman et al. 1997). The taxa often associated with these ecosystems include amphipods, isopods, ostrocods, thermosbaenaceans, and remipeds (Images: middle previous page, C, D, E current page).

It is interesting that as a diver passes through the halocline of these caves, they may be passing through a bacterial layer delicately suspended by the density gradient between the fresh and saltwater, one vital to the production and health of a very unique ecosystem. These caves have very specific physiochemical properties that organisms must adapt to, including hypoxic conditions in and around the halocline, where presumably nitrification, a chemosynthetic process, is occurring (Pohlman et al. 1997). These caves can be divided vertically into three zones, the upper fresh water layer, the halocline hypoxic layer, and the saltwater bottom (Fig. 1). This provides differing environments to which organisms must adapt.

It is not just the physiochemical aspects of these caves to which the fauna must adapt. The fact that the same taxa are often found living in these caves (whether you explore caves in the Bahamas, Cuba or the Yucatan Peninsula), suggests that there are very specific biological selection pressures at work on these organisms. Images located in the middle of the previous page, C, D, and E of this page show various representative species of the groups common to these caves. Each group fills a specific role or niche in the ecosystem. These factors combine to form a unique ecosystem in which organisms must adapt to narrow physiochemical parameters and very similar biological selection pressures.

Our knowledge of these systems may allow us insight into evolutionary processes; it may even allow us to make predictions on potential species distributions. I am currently looking into the evolutionary effects on closely related species that live in different ecosystems, i.e., fresh water versus anchialine caves. The results have been surprising, and seem to verify the strong selection pressures acting on those species found in anchialine environments. I recently collected a remiped crustacean from a cave on the northern coast of Cuba. Up to that point, no remipeds had been found on Cuba’s northern coast; they had only been found in caves on Cuba’s southern coast. The collection of a remiped in this new locality strongly suggests that other taxa commonly found living with remipeds, such as Bahadzia, an amphipod genus, as well as others, may be found in anchialine caves on Cuba’s northern coast. These findings are exciting as they help us assemble a picture of how these organisms evolved and dispersed over time.

The very narrow parameters in which these organisms live may ultimately be their undoing. Coastal regions of many areas where anchialine caves are found, especially in the Yucatan, are under increasing pressure from developers. Threats to these caves include physical destruction, sewage injection, surface landfills that leach pollutants into the ground water, and even divers. As divers enter these caves, fish may follow and do damage to the endemic fauna by predation. It is well documented that as part of the adaptation to a hypogean existence, stygobitic species often produce fewer offspring. Predation pressure from outside the system may cause population numbers to quickly fall in heavily traveled caves. Another threat divers pose is simply due to their presence. Moving through the halocline and introducing oxygen to the environment via exhalation can disrupt the mixing layer, alter the bacteria’s specific location and surrounding water chemistry, and may disrupt or even destroy the chemosynthetic bacteria that act as the energy base of the whole system.

Ultimately, the surface infrastructure needed to support the hordes of divers and tourists that flock to see these wonders of nature is the biggest danger. It is interesting, however, that even though divers are encouraged to leave as small a footprint in these caves as possible, attempting not to destroy the beautiful and delicate geological features of these caves, with each dive irreversible damage may be unwittingly done to the delicate biological features of these caves.